The Hubble Space Telescope is arguably the most famous telescope ever built. Launched in 1990 on the Space Shuttle Atlantis, Hubble has since made more than one million observations.

Hubble changed two things: The way astronomers could see the Universe, and the public perception of space. Hubble made astronomical images mainstream, showing scenes that most people had never imagined. 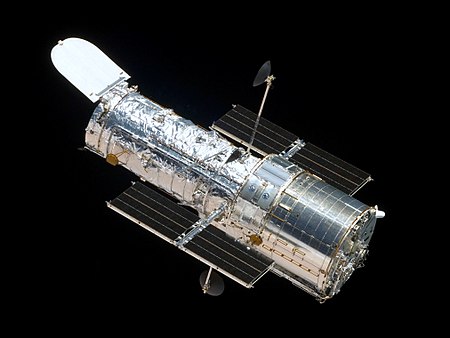 The Hubble Space Telescope as seen from the Space Shuttle Atlantis in 2009.

The idea of placing telescopes in space goes back at least to the 1920s, and the first working versions were launched in the 1960s. The Hubble Telescope was proposed and funded in the 1970s but was not launched until 1990.

When Hubble was put into operation, it became obvious that there was a problem. The images were blurry due to a defect in the primary mirror. NASA faced a wave of criticism so intense that its future as an agency was in question. Fortunately, NASA was able to engineer a solution and the telescope was fixed in 1994.