LauncherOne is a small rocket designed to launch from the underside of an airplane and carry payloads of up to 300 kg (660 lb) into Earth or Sun-synchronous orbit. The carrier aircraft is a modified Boeing 747-400 named Cosmic Girl.

LauncherOne is developed and operated by Virgin Orbit, a subsidiary of Richard Branson's Virgin Galactic. 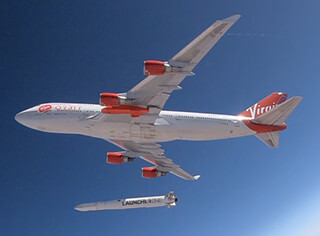