Baikonur Cosmodrome is a spaceport in Kazakhstan. It was constructed by the Soviet Union in the 1950s and was the launch site of the first artificial satellite (Sputnik 1) and the first human in space (Yuri Gagarin / Vostok 1). After the dissolution of the Soviet Union, the site became the property of the Kazakhstan government. It is now leased to the Russian government in an agreement that expires in 2050. 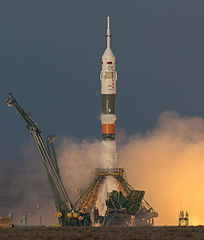