An aurora (pl. auroras or aurorae) is a natural phenomenon that creates light displays in the sky above the poles of a celestial object. Auroras are also known as polar lights, aurora polaris, aurora borealis (northern lights) and aurora australis (southern lights).

Auroras are quite common in the Solar System. Most planets have at least some amount of auroral activity. Even moons and comets can have them.

On Earth, auroras are a spectacular sight. Aurora-hunting is a popular tourist attraction and many businesses offer travel plans, accommodation and sighting opportunities. 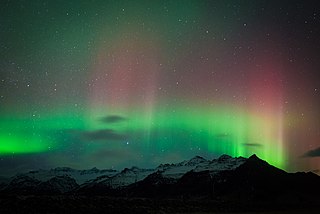 Auroras are caused by streams of charged particles (e.g. electrons and protons) coming from Sun, called solar wind. These particles interact with Earth's magnetic field if they get close enough. Most particles are deflected away from Earth but some are caught in the magnetic field and get accelerated towards the poles. As they pass through the atmposhere at very high speeds, they collide with particles in the atmosphere and heat them up. This is called "excitation" and it makes the various glowing colors.

The patterns are created by the lines of force in Earth's magnetic field.

Auroras on other planets